Cleveland Municipal Court celebrated its 100th anniversary on January 2, 2012. To mark this occasion and to note our small footprints in the clay beneath our city, we present the first installment of the history of our court. The authors make no claims as 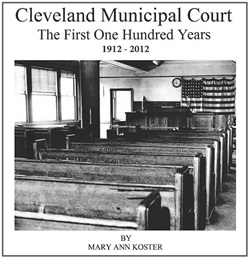 to writing the definitive story; source documents are few, and far from exhaustive. The topic of municipal courts has evidently inspired few authors, a condition that perhaps will change with the passage of another hundred years. Who knows?

As an employee of the court for the past 44 years, this has been the single most important project with which I have been associated. Researching, compiling and writing this account has been both rewarding and enlightening, and it proved just how much the municipal court is the “court of the people.”

My husband and I hope that the reader will find this chronicle as interesting and informative as we found the challenge of the research. We had never undertaken a project such as this. There has been much written about the supreme courts, appeals courts and common pleas courts, but precious little has been written about municipal courts. It has taken three and a half years for this story to be compiled. Thank goodness for the archives of The Plain Dealer, The News and The Cleveland Press for their coverage of our court, especially in the early days. In those earlier years the court was less than diligent at keeping historical records. What records that were kept were irreparably damaged by a flood in the basement of City Hall. The destruction was only discovered during the move from that building to the Justice Center in 1977. To say the least, the research for this book project was difficult and time consuming. We hope that someone will take up the mantle after this. The stories, good and bad, should be preserved for posterity.

I have enjoyed my 4 ½ decade career with this court, and the many wonderful people that have crossed my path. It has been an honor and a privilege to be a public servant. I had no idea that this was the course laid out for me when I started. We offer our work as a salute to the many men and women who have dedicated their work lives to the fair and forthright adjudication of legal matters before this court throughout this past century, be they elected or appointed. We fervently hope all future employees of this court will read with interest about what has gone before them and pledge their work lives to learn from the mistakes of the past, and commit themselves to honest and steadfast public service.

THE CLEVELAND MUNICIPAL COURT A HISTORY

This year [1987] the Cleveland Municipal Court celebrates its 75th Anniversary. The court was established by an act of the Ohio General Assembly in 1911 and opened its doors on January 2, 1912 in the old courthouse located on the northwest corner of 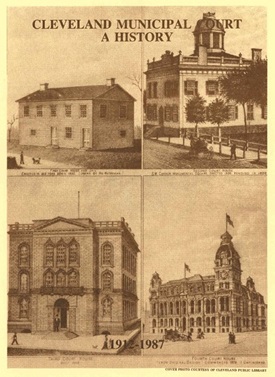 Public Square. The court was gavelled to order by Chief Bailiff Charles Selzer and after brief opening remarks by Chief Justice William H. McGannon, Judges David B. Cull and George P. Baer assumed their duties in the criminal branch and the remainder of the court began the business of the day.


But before we begin to reminisce let us take a trip back into an earlier time and review the events and circumstances that shaped our present day system. Prior to statehood, Ohio was part of the Northwest Territorties. At that time the areas known as the Firelands, Western Reserve and the Sandusky Islands were incorporated as Trumbull County with Warren being the county Seat.


The Territorial Governor General Arthur St. Clair authorized the first form of civil government when he convened the Quarter Sessions Court of Trumbull County, so named because it met four times a year. On August 25, 1800 a five judge panel met near Ephraim Quimby's corn crib in Warren. At the first five day court session, seven men were appointed to divide Trumbull County into townships. A committee of the court chose a room in Quimby's log cabin as a temporary jail and made him the jailer. At that time Lorenzo Carter was "the law” in Cleveland. He and Stephen Gilbert were appointed as the first constables of the new village.